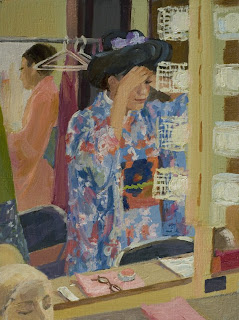 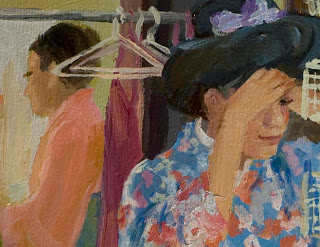 I love the way the mirrors capture the atmosphere of the theater dressing room. This is Caitlin Ross preparing for a Saturday evening performance of the Mikado. The rich colors in this painting may not show on your monitor.
Posted by Marilyn Farrell Webberley at 8:56 PM No comments:

I use Safari as my browser program. Earlier this week I opened this site in Firefox and was shocked to see the difference. Firefox does not display color in the same way. Opening this site in both programs and displaying them together on my monitor, the difference was shocking!
I realize that different monitors will display the colors differently, but when the same monitor is used to show the same site, opened to the same image so both visible side by side, one opened in Safari - the other opened in Firefox, the difference in color was astounding.
When using Safari, clicking to enlarge the image gives color very much like the actual painting (on my monitor) while the smaller images on this site seem very pale in comparison. However, in Firefox the color does not improve. In fact it looks even more washed out when clicked to enlarge. Rich, warm colors do not show up at all and the image looks slightly our of focus. Same for Internet Explorer. I would be interested to know if any of you have found the same to be true when viewing your paintings.
Posted by Marilyn Farrell Webberley at 3:29 PM 1 comment: 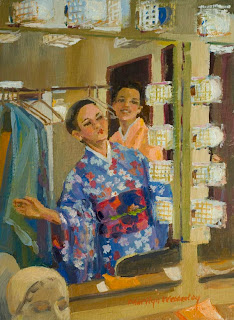 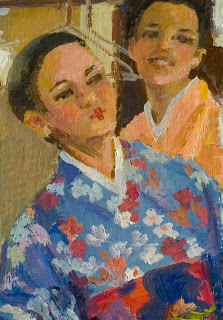 8 x 6
oil on wooden panel
These maidens are getting ready for the stage - making sweet lips for the Mikado. This little painting was so much fun, I may use it as reference for a larger painting.
Click image to enlarge and see the brighter color of the actual painting.
Posted by Marilyn Farrell Webberley at 10:57 AM No comments: 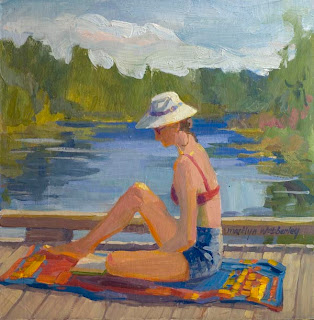 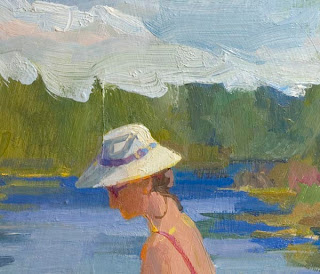 10 x 10 inches
oil on gessoed museum board
Another sunny day in the Pacific Northwest! This delightful spot is near our house. The air carries the music of summer birds and occasional voices and laughter of people walking along the path.
Click on image to enlarge and see the richer color of the painting.
Posted by Marilyn Farrell Webberley at 8:11 AM No comments: 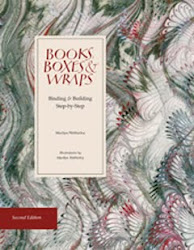 Four of my paintings have been chosen by the curators of the US State Department Art in Embassies Program (AIEP) for an exhibition in Tel Aviv, Israel. Click image to see page.

A documentary featuring Women Painters of Washington's "Celebration! A Traveling Exhibition" I am one of the artists interviewed. Click image to view documentary.

Given in recognition of outstanding service to the organization. Click image to view article.